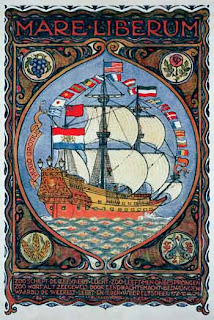 There's something about the law of the sea.
Teaching Public International Law has taught that although the law of the sea is among those furthest from the experience of the average student, the average student nonetheless finds in the law of the sea a kind of romance. Perhaps we all still long for our own turn on Treasure Island, our own Two Years Before the Mast.
Especially gripping is the battle of words between John Selden and Hugo Grotius (prior IntLawGrrls posts). Theirs was a prime politicolegal-philosophical struggle of the middle of the last millennium -- a battle over whether the sea/mare was clausum/closed, as England's Selden maintained, or liberum/free, as Holland's Grotius posited. It is, moreover, a struggle that many an intlaw casebook renders epic. (Caveat: Our colleague Edward Gordon has published a must-read study that adds considerable complexity to this binary account of the debate respecting law and oceans.)
That struggle undergirds the newest ASIL Insight, entitled "Climate Change and Guidelines for Argo Profiling Float." The authors -- oceans experts Aurora Mateos (below left) and Dr. Montserrat Gorina-Ysern -- thus open with the reminder that

the law of the sea remains affected by an ago-old controversy among scientists and diplomats over the dichotomy between 'freedom and regulation.'The authors proceed to detail, 1st, how the Argo float, which promises to provide data on inter alia climate change is among the "oceanic research activities with new technologies, instruments, and equipment" that engenders "a fierce resistance to legal regulation of the high seas," and 2d, how that resistance "coexists in an uneasy compromise with a fierce protection of coastal States' sovereign rights to explore and exploit the natural resources of the continental shelf and the Exclusive Economic Zone (EEC)." (image credits here and here)
Bottom line: 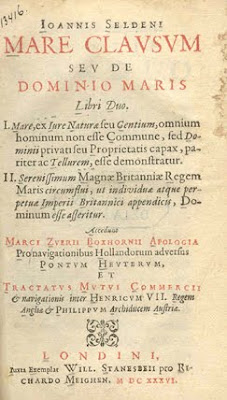 ► In Grotian fashion, coastal states near whose waters such research might be conducted by other states -- the Insight mentions Peru and Argentina -- maintain that the Argo float and similar research activities fall within the United Nations' regulatory structure established by the 1982 U.N. Convention on the Law of the Sea.
► But research-resource-rich countries like the United States (a nonparty to the 1982 Convention, as we've posted) lean toward considering such research activities the unregulable beneficiaries of Seldenian freedom of the high seas.
The Insight authors thus expose a politicolegal-philosophical struggle that offers intlaw profs -- at least those able to navigate the viral soup of acronyms epidemic in environmental law -- a contemporary application of the old Selden-Grotius standoff.