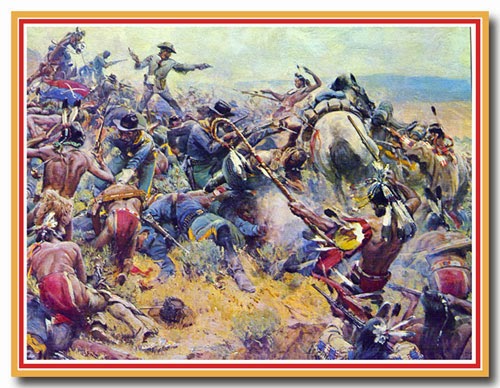 On November 11, honor the brave dead

from Afghanistan and Iraq, heroes against
German and Japanese imperialism

and the sacrificed souls in “the war to end
all wars.”

But also thank Custer’s soldiers
for not completing the genocide.

and then dropped an A-Bomb on Washington, D.C.

to stop invading Custer
from killing his women and children
like so many insects.

Upon awakening, I discovered that America
attacked Iraq for weapons of mass destruction

because recipients of evil often do evil in return.

Russian troops rhythmically
marched in the Ukraine,
a cruel video
beheaded a journalist,

ruinous bombs reined down
on rubbled villages of the weak,
and a bullet to a private’s leg became gangrene
as sepsis spread to amputation and death.

because the Black Hills were the Lakota’s by treaty

and that God had ordered Custer’s men to lay down
their weapons or be shot for insubordination.

By river rapids, a sweating grimacing squaw
watched the blue cavalry approach as
she gave birth to a red son,


Gil Hoy received a B.A in Philosophy from Boston University, an M.A. in Government from Georgetown University, and a law degree from the University of Virginia. Gil also is an elected member of the Brookline, MA Democratic Town Committee, and served as a Brookline Selectman for 12 years. Gil studied poetry at Boston University, and started writing his own poetry in February of this year. Since then, Gil’s poems have been published in Soul Fountain, The New Verse News, The Story Teller Magazine, the Clark Street Review, Eye On Life Magazine, and Stepping Stones Magazine.