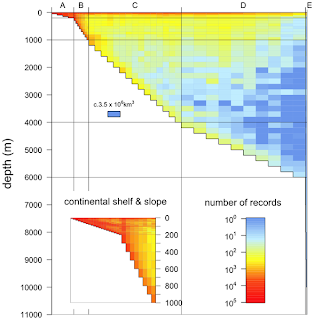 Viewed from space, the Earth is dominated by oceans. Indeed, oceans cover more than 70% of the surface of the planet. And the marine environment is by far the largest ecosystem on Earth, with many distinct and irreplicable sub-ecosystems. In terms of ecosystem services, habitat, and vulnerability to human-induced threats the marine environment is unrivaled. Yet, we know remarkably little about this immense, beautiful and vulnerable ecosystem.
The graph at right, from a 2010 article by Webb, et al., documenting our chronically under-informed state concerning the deep ocean, is particularly illustrative.
The reds and oranges on the graph shows where we have significant knowledge about ocean life, and the blues and yellows indicate regions of the ocean for which we have very little information. There are vast sections of the ocean, indeed, the overwhelming majority, for which we have little or no information on what lives there. (image credit)
As we've posted, in December 2008, the U.N. General Assembly designated this day, June 8, as “World Oceans Day” (resolution 63/111, paragraph 171). World Ocean Day is an opportunity not only to recognize the limited state of is our knowledge about the oceans, but to pause and take stock of what we do know about the current state of the world’s oceans. In his World Ocean Day message, U.N. Secretary General Ban Ki-moon proclaimed: 'World Oceans Day is an opportunity to reflect on the importance of oceans to humankind’s sustainable development. It is also a time to recognize the many severe challenges related to oceans.' Taking stock of the state of the world’s oceans is a depressing task and each year the news seems to get worse. Some statistics:
► According to the National Oceanic and Atmospheric Administration, the worldwide ocean surface temperature this past April was 0.38°C (0.68°F) above the 20th century average of 16.0°C (60.9°F). It was the 11th-warmest April on record. 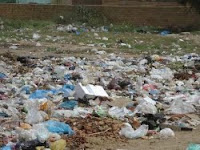 ► Both the Atlantic and Pacific oceans have garbage patches, where, due to ocean currents known as gyres, millions of tons of plastic that has been dumped into the world’s oceans accumulates, killing seabirds, marine mammals and fish. (credit for photo of plastic-bag pollution)
► This past Sunday, the European Project on Ocean Acidification warned the Intergovernmental Panel on Climate Change of measurable changes that had already occurred in ocean chemistry and pH, with a marked fall in pH over the past few decades. This means that the world’s oceans are already acidifying, and the process is only expected to continue, jeopardizing marine food webs in the process.
► The world’s coral reefs are suffering a global bleaching event, possibly the worst ever recorded.
► The United Nations' Food and Agriculture Organization reports that 32% of the worlds fisheries are either overexploited or depleted, with the overwhelming majority of the rest fully exploited. That means there is no room for fishing to increase even as human population increases by more than a third, to over 9 billion by midcentury and 10 billion by 2100.
► In the Gulf of Mexico, unusual turtle and marine mammal mortalities are being attributed to the millions of gallons of oil released because of the 2010 BP oil spill (prior posts available here), and because of BP’s subsequent decision to dump massive quantities of toxic chemical dispersants.
Beset by warming, acidification, bleaching, overfishing, and plastic and other pollutants, the world’s oceans are in serious jeopardy. International and domestic laws seem powerless to reverse these trends and protect coral reefs, fish populations, and ecosystem integrity.
As if these existing threats were not enough, the world’s oceans are facing yet another threat -- contamination from radioactivity. 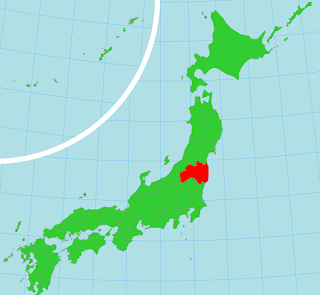 Earlier this year, as chronicled in posts available here, an earthquake and tsunami destroyed the Fukushima nuclear facility in Japan. In a desperate attempt to avoid a catastrophic meltdown, the Tokyo Electric Power Co., known as TEPCO, began pumping seawater into the facility.
Now, even as pumping of water into the damaged reactors continues unabated, TEPCO is struggling to cope with an additional problem -- tens of thousands of gallons of contaminated water. Somewhere between 10,000 and 15,000 gallons of that water has already been dumped back into the ocean, and an untold amount has reached the ocean through other means. (credit for map of Japan with Fukushima prefecture in red)
Already, Greenpeace has documented high levels of radioactive iodine in fish and waters more than 40 km from the damaged reactors. Whatever contamination has already occurred as a result of releases from the damaged nuclear facility might be about to get much worse.
The French company Areva is currently setting up treatment plants to decontaminate the radioactive water used to cool the devastated Fukushima nuclear facility. The plan is that the treated water will then be dumped back into the ocean.
Areva already operates a similar decontamination facility off the coast of Normandy. That French facility has been a hotbed of controversy, because of alleged harms from the same process Areva proposes to use in Japan. For decades, Greenpeace and Physicians for Social Responsibility have repeatedly alleged that the water released from this French facility still contains illegally high levels of radioactivity. Moreover, the treatments proposed at Fukushima stretch this technology beyond all past experience. Indeed, the best that Areva’s spokeswoman could offer was: 'Honestly it’s hard to say how it will work. We hope everything will be fine.' Not exactly the ringing endorsement we might have hoped for on World Ocean Day.